Many decisions, from how to invest your portfolio to what kind of job you might take would be impacted if you knew a recession was approaching. Business owners, armed with this kind of knowledge, would be able to make more informed decisions about whether to expand capacity, invest or raise capital, borrow, change floating rate debt to fixed-term debt, possibly even sell their business.

(a) Background and the theory of yield curves

Built from all the interest rates paid by a particular Government or corporation, after issuing multiple bonds with different duration, the bond yield curve below is the typical shape. The longer the term of the bond, the higher the yield, because, under normal circumstances, money is worth more today than tomorrow, as bond holders will typically look for a premium to postpone their spending that dollar today. 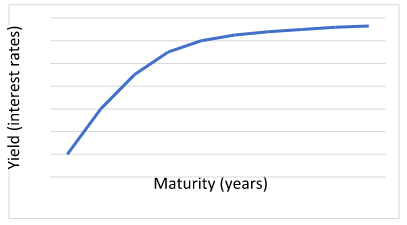 When investors perceive that a recession is approaching, there is a flight to quality: they typically flock to Government bonds, particularly US Government bonds (the reserve currency of the world monetary system). In such times, investors are concerned about preserving the value of their holdings in the medium to long-term. Hence there is a so-called “compression” of the yield curve: the premium of long-term yields or interest rates over short term interest rates diminishes (as will be illustrated and discussed in more detail in Figure 5 below.

(b) How good a predictor of recession have yield curves been in the past?

Historically, the inverted bond yield curve has been a signal of an impending recession as it has accurately predicted every recession since mid 1960s, with only one false positive, in 19661. The 2007 inversion (figure 2), followed by the 2008 crisis is a perfect example of the strength of the yield curve as a predictor. 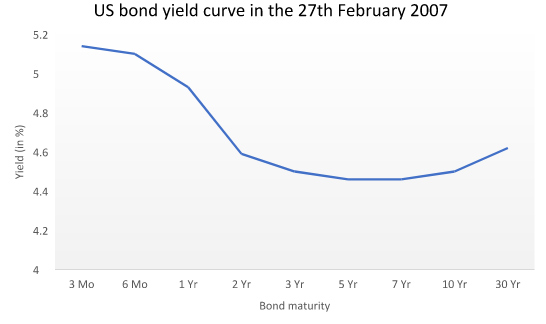 While the above yield curve was a harbinger of the 2008 crisis, it is interesting to note that in subsequent month the extent of the inversion diminished and even stopped being inverted (figure 3). 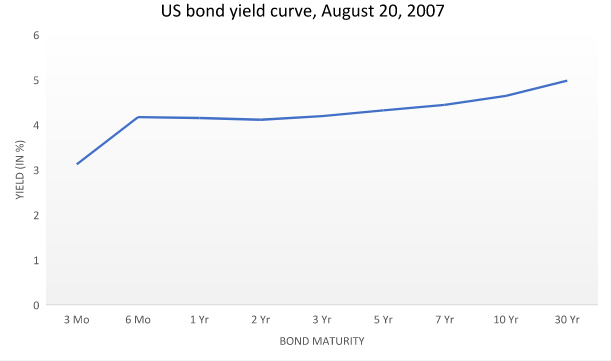 By the time Lehman Brothers filed for bankruptcy on September 15th 2008, the US bond yield curve was even less inverted (see figure 4 below). In the same way that an electrocardiogram does not reveal continuous problems leading up to a heart attack, but may very well reveal some temporary negative patterns in the weeks or months leading up to a heart attack, so too with the yield curve.

In a nutshell, over the past two years, there has been a so-called “flattening” of the yield curve. The chart below compares the yield curves as of January 1st, 2016 to the curve as of August 27th, 2018. 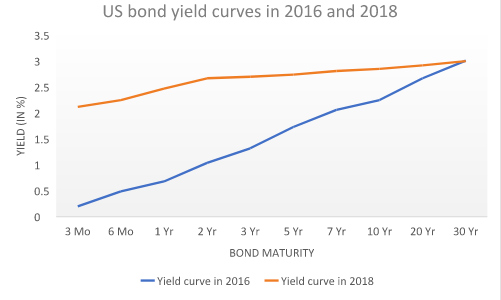 On December 7, 2018, the five year yield temporarily dipped below the three year yield. This created some market panic, with the DJIA tumbling 799 points that day4. Some investors feared that this would also be a harbinger of a future recession. It should be noted that this was just a very brief inversion of the yield curve, over a very short period and that the curve has since normalized. Nevertheless, the flattening of the curve and this skittish inversion should warrant caution. The bull market will not last forever.

(d) What are the implications for business owners?
If a business owner believes a depression or recession is approaching, he or she might consider any of the following steps:

Of course, one can never know with certainty when the next recession will hit. But the yield curve can provide some extremely valuable insights.