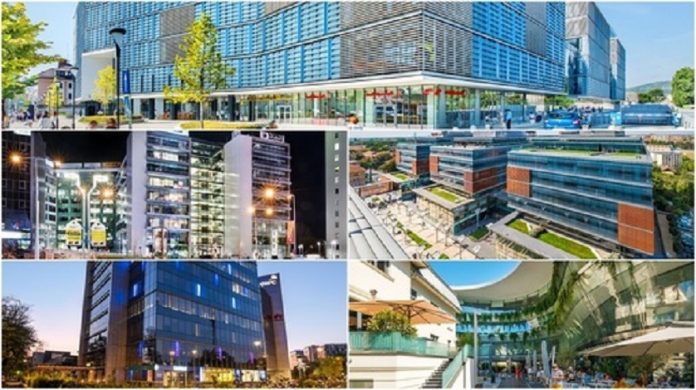 After crossing rudely its way through Romania’s shopping malls, displaying a monopoly with the help of its 43 Group Companies – out of which most of own and manage shopping malls and other similar types of commercial space – NEPI strikes last year when it sells 4 of its “jewels”: (listed below by value)

to AFI Europe Romania (the company who developed and manages AFI Cotroceni, the largest shopping mall in Romania), in a transaction over EUR 300 million.

But let’s see why I said jewels in quotes…

Dr. Kristine Bago: The “jewels” sold look like “tins” if we look at the figures reported in the last 5 years (2015-2020) by these companies, as can be seen in the table made by me below based on public data available on the Finance Ministry of Romania website:

These projects, as can be seen in the table, have been loss-making almost all the time, with the exception of 2 companies in 2 years – which made rather a modest profit in total amount of EUR 0.44 million, a low amount considering the object and nature of the activity of these companies.

The turnover of these companies is not better either, the four properties registering an annual rental income of ONLY EUR 24.1 million in NEPI’s accountancy books, which means that AFI Europe’s return of investment will be in at least 12.5 years – and this will happen if we don’t take into account the economic crisis that has hit and which has a strong impact over this field, connected to inflation, and the competitive environment that can sometimes drastically change any direction.

Reporter Economica: So basically this NEPI Rockcastle branded investment portfolio is not really a “castle“, but rather a farm…

Dr. Kristine Bago: Overstated I would say, given the reported figures, which are telling the opposite mentioned on the company’s website – “The leading property investment and development in CEE“, with an investment portfolio of EUR 5.8 billion, across 9 European countries.

Reporter Economica: If everything goes “pink” in NEPI’s heaven, according to the data on their website, why would you sell your most important assets in 2020? What’s the reason behind it?

Dr. Kristine Bago: The decision to sell the office portfolio to AFI Europe Romania in a transaction of over EUR 300 million was a good one, as the NEPI Group needed cash at that time when liquidity was important (in times of crisis) and also they stopped the further depreciation of assets – that were already significant loss-making.

Reporter Economica: What did you mean when you said “overstated“?

Dr. Kristine Bago: If we look at the NEPI Rockcastle Group in terms of shareholding, we have the following case:

If we look at the shareholding structure, it includes mainly real estate investment fund companies.

Quite “convenient” to have the help of investment funds in the countries where you work and the relationships of board members (former alumni of significant financial and management consulting companies around the world, bankers, or leaders of local real estate companies). However, in practice, not many have this “luck,” let’s say.

But decisions are made by the top 10 shareholders in the table above. They have the most significant number of shares and therefore “influence” the rest of the non-voting shareholders due to the individually insignificant percentage of shares.

Depending on the decisions issued, the voting shareholders (that have the power) may or may not leave in time to save themselves – as occured with the CEO&CFO of the company this year, when they announced the end of their leadership.

Still, small investors do not receive the same „chance”.

All they will be able to do is find themselves in possession of an overvalued management portfolio of shares. These shares would not sell even for the price of their initial investment, ending their shareholding with a negative result – loss.

It represents exactly the classic case when the CEO/CFO buys overvalued shares/assets, they fill up with cash and suddenly they feel the “need” for something personal and the small investors – who have nothing guaranteed, lose everything.

The NEPI Group had cumulative losses in 2020, from investor’s money, of over EUR 84 million and that is on the Romanian market only.

Reporter Economica: So, the NEPI Group loses hundreds of millions of EUR annually, but continues to operate in Romania, where the state does not take any money.

Dr. Kristine Bago: Yes, the NEPI Group Romania owns malls and retail spaces valued at 2 billion euros, but avoids paying taxes to the Romanian state – that is if we refer to the few cases where they do not make a loss, but a profit.

The Group does not make a profit and records losses of hundreds of millions of EUR annually.

Precisely, this is the case of what I was saying in the last interviews about the recipe for success on “loss”  – or rather, how to build a successful business being on loss.

The companies in the NEPI Group Romania pay almost no income tax in Romania, despite the dozens of malls and commercial spaces they manage.

If the substantial losses incurred each year are not somehow covered, companies should go bankrupt.

However, this is not the case with NEPI Group Romania, which most likely found another source of financing his activity – mainly through loans that do not need to be repaid and using the Group’s help – probably from the money of the small shareholders mentioned above – those without decision-making rights due to the insignificant percentage of holdings, individually (below 0.75%), but with an aggregate value of over 50% – of approx. 2,170,262,676 USD.

Such a case may also hide the capital transfer from Romania to other subsidiaries of the Group from abroad.

Reporter Economica: On what you rely on when you say that Nepi Romania Group records significant losses and pays almost no taxes to the Romanian state?

Dr. Kristine Bago: In order to find out the real situation in this case, I have made a financial analysis of all companies within the NEPI Group Romania, in the period between 2015-2020 (the last 5 years of financial reporting data available on the Ministry of Finance website – www.mfinante.gov.ro), as can be seen in the tables below: Reporter Economica: One thing that stands out is represented by the cells with 0 that you have coloured in red. What do they represent?

Reporter Economica: So basically they are Profit makers, but don’t record any Income Tax expense?

I will also give an example – as you may notice below, for this company IRIS TITAN SHOPPING CENTERS SRL, Tax Code 17545630, founded in 2017, we have the following recordings:

And this is the case for all the cells with 0 coloured in red. Reporter Economica: So basically according to the table, 90% of companies in the last 5 years are loss-making, most of them having no employees, and the remaining 10% make a gross profit, for which they do not record&pay any income tax expense.

Can we get an idea of what is the amount that would have been paid if these companies had incurred such an expense? (with income tax)

Dr. Kristine Bago: In order to have a point of view regarding the amount: (based on the data collected by me according to profit and loss accounts vs. income tax rate)

Reporter Economica: So only from the Corporate Income Tax standalone, in the last 5 years, the NEPI Group Romania made a “saving” of EUR 6 million (approx. 30 mln. LEI).

Money that could have been into the state budget now and thus reduce the local taxes for Romanian citizens.

Obviously this can be, it seems, in Romania, just a movie scenario…

Reporter Economica: Given the EUR 150 million recently mentioned by Nepi Group Romania in a press release – as tax charges generated to the state budget in the last 5 years and your analysis, in which the Corporate Tax Expense represents only approx. EUR 7 million, it seems that there is still a long way to go before these amounts represent the reality…

Dr. Kristine Bago: Of course, there are other taxes such as tax on dividend income tax, social contributions, etc. but it is clear from an approximate point of view that we cannot reach such amounts under any circumstances, and especially with no employees in most of the companies.

Reporter Economica: Returning to the case of the “jewels” sold by NEPI Group Romania last year, it seems that if we analyze also in the context mentioned by you – overstated assets, at least for AFI Europe Romania, this acquisition is NOT necessarily an extremely good one – given the significant losses of these companies, as we have seen in the situation exposed by you, NOT a very good ROI (Return on Investment) level as you mentioned, probably requiring, as in the years when it was under NEPI’s ownership, a massive “support” from the Group – AFI Europe, this time, through the contribution of its shareholders.

And theoretically, after you fry, you’ll also blow on the yogurt…

But the Romanian real estate market is not learning, and this year NEPI is entering in the Romanian residential market – building homes near to Vulcan Value Centre, in Bucharest.

Dr. Kristine Bago: Probably using the same “recipe for success” as the other investments made so far…

The „Know-how” exists, at least on making losses and overstating assets…

Reporter Economica: Let’s see who will “enjoy” these “jewels” this time…