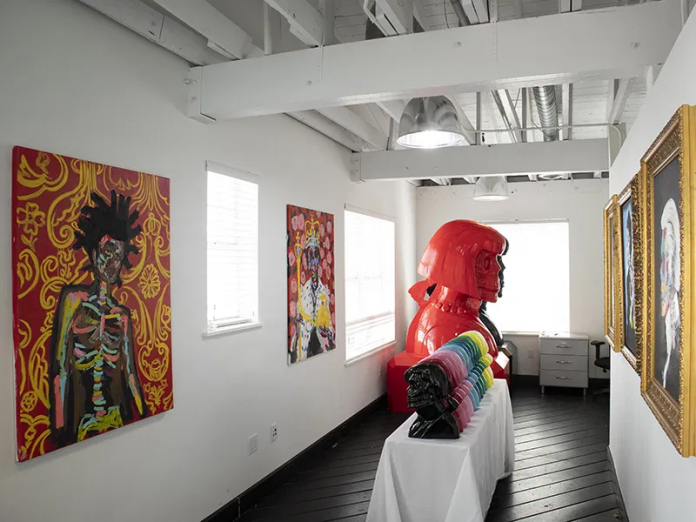 The Turks and Caicos-born artist Bradley Theodore first hit the art world headlines with his works of Anna Wintour, Karl Lagerfeld, and Kate Moss as fleshless icons, but says bones have “never been the focus” and that his works are instead about the person’s history and life.

“The skull is the ultimate symbol of man’s existence,” says Theodore, “for the average onlooker it erases notions of race, color, sex, and brings us all to an equal playing field. The colors and brushstrokes represent the subject’s emotions and history. With the Anna and Karl pieces I wanted to explore the relationship between the artist and curator—the emotional bond that exists between collaborators.”

Growing up, Theodore split his time between Miami and New York. “As we were immigrants, our family life was America in 3D.” In New York he studied digital art at the School of Visual Arts and became involved in the street art scene “wheat-pasting skater-type characters on walls. I created these stencils out of luxury shopping bags, then used them to subtly tag the sidewalks of the city.”

Deciding he wanted to evolve his work and bring traditional studio methods to street art, Theodore taught himself to paint via YouTube tutorials and began to work on canvas. Today he starts his pieces by painting the canvas black before layering on color. “For some reason, when I paint onto darkness I feel like I can see deeper and clearer into the idea of existence,” he observes.

In recent works, Theodore has added flesh to his subjects and begun “working on ways to add more emotion to the characters I paint. Recently I’ve started to focus on the eyes.” The results are energetic works that GQ magazine has described as “chromatic thunderstorms at once exhilarating, incontrovertibly powerful, and ever so slightly chilling.”

The subject of a documentary, Becoming: Bradley Theodore, which premiered at 2016’s Tribeca Film Festival, Theodore has collaborated with Google, Puma, and Rolls-Royce and was artist in residence at the US Open. Today he works from a studio in Miami, exploring themes such as fleeting fame and inescapable mortality, and is currently preparing for a new 2020 show, The System is Broken. Somehow, Theodore has found a way to make it work for him.