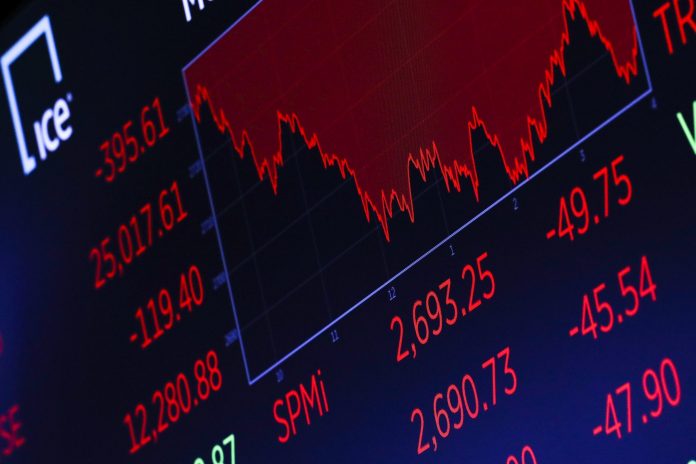 For much of the last year, America’s trade war was the rest of the world’s problem.

Even as growth slowed in China, Japan and Germany, the United States economy held up and stocks on Wall Street remained close to records.

Now, investors are facing evidence that tensions between Washington and Beijing are chipping away at America’s factories. That has sent stocks tumbling and raised the stakes for the next round of talks between the leaders of China and the United States, the world’s two largest economies.

The S&P 500 slid on Wednesday for the second straight day, falling 1.8 percent in its worst drop since late August.

Sectors of the market most exposed to the economy — energy, financial and industrial companies —  all fell sharply. Technology stocks that have been particularly sensitive to developments in the trade war slumped, as did shares of chemical companies and fertilizer manufacturers. Crude oil prices and yields on government bonds also dropped, reflecting concerns about growth.

The selling this week began on Tuesday, after a report showed that factory output in the United States in September had fallen to levels last seen at the end of the financial crisis a decade ago. The data was a fresh indication of the trade war’s creeping impact on the American economy.

Even though both Washington and Beijing have taken small measures to ease their tensions, investors remain wary of the next downdraft and eager to see a lasting breakthrough in the coming round of talks. Representatives from China and the United States are expected to restart high-level negotiations in Washington late next week.

“This is the markets unequivocally insisting that there be verifiable, material progress in next week’s trade talks,” said Julian Emanuel, chief equity and derivatives strategist at the brokerage firm BTIG.

Because it is less dependent on manufacturing, the United States is less exposed to rising tariffs and a slowdown in trade than other large economies. But it is not immune.

In the second quarter, business investment fell, with analysts, in part, blaming uncertainty related to the trade war.

“There’s no question that the global economy is slowing and that’s beginning to show up in U.S. data,” said Scott Clemons, chief investment strategist at the private bank Brown Brothers Harriman.

Economists now expect that economic growth will fall below 2 percent next year, according to estimates compiled by FactSet.

And whether the United States can generate even that lower level of expansion hinges on whether consumer spending — which accounts for about two-thirds of economic activity — remains strong.

On Friday, the Labor Department will report on the monthly pace of hiring, and economists expect that report to show unemployment remained near a 50-year low in September. That could help calm investors’ nerves.

“Business confidence has eroded quite a bit due to trade tensions,” said Patrick Chovanec, chief strategist at the wealth management firm Silvercrest Asset Management. “But consumer confidence has not and it’s been supported mainly by a vibrant jobs market.”

The fact that businesses have kept hiring, and that the Federal Reserve is cutting interest rates, have both helped stocks this year. Even after the recent decline the S&P 500 is up more than 15 percent in 2019.

But sudden outbreaks of economic alarm have been a recurrent feature of the markets in the past year.

In December stocks plummeted over fears of a potential recession, before soaring in January after the Federal Reserve indicated it would cut interest rates to offset economic damage from the trade fight. Similar, though smaller, swings took place in May and June.

President Trump, who has a close eye on the stock market and has in the past played up its gains as a report card on his presidency, attributed Wednesday’s decline to an impeachment inquiry by Democrats. “All of this impeachment nonsense, which is going nowhere, is driving the Stock Market, and your 401K’s, down,” he wrote on Twitter.

But the market unrest wasn’t contained to Wall Street.

In Europe, where manufacturing accounts for a larger share of economic output, the selling on Wednesday was sharper than in the United States. Britain’s FTSE 100 dropped more than 3 percent, its worst decline this year, while Germany’s Dax index dropped 2.8 percent.

Germany has become a point of concern for investors, with its factory orders dropping as Chinese companies, hit by tariffs on exports to the United States, purchase less German machinery.

At the same time, Britain remains enmeshed in negotiations over Brexit and faces huge uncertainty over its future trading relationship with Europe. There is still a risk that Britain will leave the bloc at the end of the month without a deal.