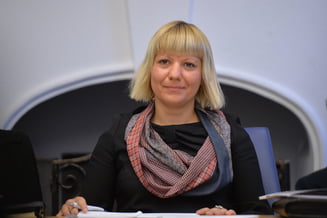 Romania continues to confront major hurdles in its struggle against deep-rooted, longstanding corruption.  In July 2019, for example, the Romanian parliament significantly weakened the country’s anti-money laundering laws, thereby making it easier to legalize the proceeds from corruption and other criminal activities.  Judge Camelia Bogdan will assess the main barriers to reforming Romania’s anti-money laundering legislation and fighting corruption in Romania.

Camelia Bogdan is an experienced Bucharest Court of Appeals judge who specializes in countering economic crime and asset recovery. In her capacity as expert of the European Commission, she has participated in more than 40 international conferences or training sessions of the law enforcement agents, and has been invited or recommended by international institutions such as the World Bank, the European Commission, the Organization for Security and Cooperation in Europe, the European Union Intellectual Property Office. In 2009, Camelia Bogdan was awarded a PhD in Criminal Law from the Bucharest University, Faculty of Law, for her thesis titled “Countering Money Laundering of the Proceeds Derived from Organized Crime Activities, in the light of Domestic and International Regulations.” She is currently working towards a new PhD under joint supervision by Bucharest University and Strasbourg University. Her thesis title is “Asset Recovery of the Proceeds of Crime in French and Romanian Criminal Trial.” In 2018, she received the Fulbright Senior Award for Visiting Scholars and the 2018 Ion Ratiu for Democracy fellowship/award. She is currently affiliated with the Woodrow Wilson International Center for Scholars. Her research focuses on Fostering Efficacy in the Asset Recovery of Proceeds of Grand Corruption in Romania, Tackling Money Laundering through State-Owned Enterprises and Global Prohibition Regimes Against Corruption.

Dennis Deletant is Visiting Ion Rațiu Professor of Romanian Studies in the School of Foreign Service at Georgetown University, Washington DC. He is Emeritus Professor of Romanian Studies at University College, London, where he taught in the School of Slavonic and East European Studies, between 1969 and 2011, and was Professor of Romanian Studies at the University of Amsterdam (on secondment from UCL) between 2003 and 2010. He is the author of several monographs on Romanian history, among them Ceauşescu and the Securitate: Coercion and Dissent in Romania, 1965-89, London: Hurst & Co., 1995; New York: M.E. Sharpe, 1995: Hitler’s Forgotten Ally. Ion Antonescu and his Regime, Romania, 1940-1944, London: Palgrave Macmillan, 2006; and British Clandestine Activities in Romania during the Second World War, London: Palgrave Macmillan, 2016 (translated as Activități britanice clandestine (Bucharest: Humanitas, 2019).  His most recent study in English, Romania under Communism: Paradox and Degeneration, was published in October 2018 (Oxford; New York: Routledge).

RSVP FOR THIS EVENT